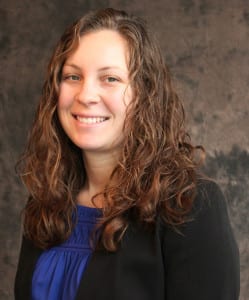 Dr. Katherine Etter Sheets is a native of Sigourney, Iowa, where she graduated from in 2008. She was introduced to chiropractic during her high school years as a result of her active involvement in athletics. She not only recovered from injuries faster, but also felt that she was a better performer with regular chiropractic. Dr. Sheets completed her undergraduate studies at Luther College in Decorah, Iowa, where she graduated in 2012 with a Bachelor of Arts degree in Health and Wellness with a minor in Exercise Science. While at Luther, she was actively involved in the Student Athletic Advisory Committee as the Secretary and was also a member of the Luther College women’s basketball team. She was a four-year letter-winner and senior captain and also had the opportunity to travel twice to South Africa to serve underprivileged children and communities.

Dr. Sheets received her Doctorate of Chiropractic from Palmer College of Chiropractic in Davenport, Iowa, in 2016. She graduated Magna Cum Laude and received the Academic Excellence award, being named to the Dean’s List all ten trimesters. The Doctor of Chiropractic program requires over 300 credit hours and 4,500 classroom hours to be completed over the course of three and one-third years. During her time at Palmer, Dr. Sheets became a member of the Iowa Chiropractic Society and also participated in a Clinic Abroad trip to Brazil. While overseas she adjusted hundreds of underprivileged patients and provided a great humanitarian service while gaining invaluable hands-on experience.

Dr. Sheets primarily practices Palmer Package, which includes Diversified, Gonstead, and Thompson techniques and also has advanced training in extremity adjusting and flexion distraction technique. Additionally, she has experience in Activator techniques as well as soft tissue techniques. Dr. Sheets is able to customize every adjustment to best fit the needs of each individual patient.